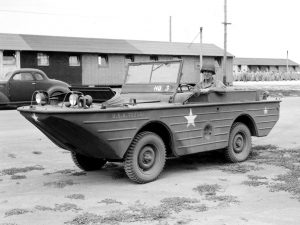 Nicknamed in the field the “Jeep in a bathtub,” the Ford GPA Seep (from Seafaring Jeep) was an awkward attempt to capitalize on the best features of the Jeep, but in amphibious form. The design instead came out to look more like a miniature version of the more successful DUKW. The Seep was not popular among soldiers, who disliked its clumsy and slow steering on land, and its inability to navigate ocean waves or deep mud. However, the model was highly popular with the Soviet Union, so much so that the Red Army continued its development even after its discontinuation in the US.

Did you know?
Today only around 250 Seeps exist though they are popular among adventurers. After the war, the US sold them as surplus to farmers, ranchers, and adventurers. Some notable adventurers include Australian Ben Carlkin, who was the first and only person to take an amphibious vehicle across the world, Americans Helen and Frank Schreider, who sailed “La Tortuga” and “Tortuga II” around South American then South Asia for national Geographic Expeditions, and British WWII vet, Lionel Force who steered one from the US to Panama and back. A larger replica also made an appearance in Indiana Jones and the Kingdom of the Crystal Skull.