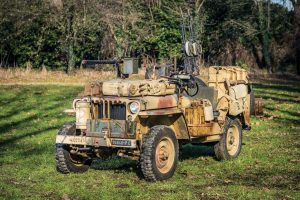 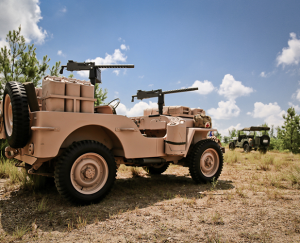 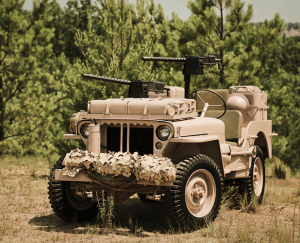 The Ford GPW was also known as one of the major iconic Jeeps known for its military efficiency and reliability during the war. Some of its many aliases include the GI jeep, the WWII jeep, and the Army jeep. The design of the Ford GPW was a result of a standardized design after testing prototypes by American Bantam, Willys Overland, and Ford.

The “G” in GPW stood for “Government”, the “P” stood for passenger vehicle with an 80 inch wheelbase, and the “W” stood for “Willys” licensed design.

The Willys MBs and the Ford GPWs of World War II are functionally identical, and had interchangeable parts. A total of 278,000 GPWs were built.

The 1944 Ford GPW seen today has been built to resemble those that were used in North Africa by the British SAS (Special Air Services.) Their first successful raid on November 17th, 1941 occurred when two groups destroyed 61 aircraft at two airfields. Another raid was launched soon after; this time twenty seven aircraft were destroyed. By July, 1942 the regiment had 15 specially modified jeeps in action in North Africa.

With all guns blazing a single SAS jeep could deliver an impressive 5000 rounds per minute! The net result was that over 400 aircraft had been destroyed on the ground by November, 1942.

The jeeps were stripped of all non-essential parts including the windscreen, most of the radiator grille bars and even sometimes the front bumper to increase the effective load carrying capacity of the vehicle. Thus the large amount of fuel and water needed for fast long-range raids could be carried avoiding the need for slower support vehicles. A water condensing unit was fitted to the front to reduce loss from the radiator which would otherwise have had to be topped up from the limited drinking water supplies. The jeeps also carried sand mats, metal wheel channels, radio equipment and large quantities of ammunition.

The jeeps were heavily armed with combinations of both Browning and Vickers K machine guns.