Machinists Otto Zachow and his brother-in-law, William Besserdich, both of Clintonville, Wisconsin, designed a front drive axle with steerable hubs containing universal joints possibly as early as 1906. The axle was followed up with a transfer case and driveshafts suitable for a four-wheel drive vehicle. During the summer of 1907 patent applications (the patent drawings can be seen below) were filed for both devices and then the pair went to work to built the first car. By 1908, they had tested a steam-powered four-wheel drive car that was a success other than issues with its power plant.

Zachow and Besserdich then built a second gasoline-powered prototype that turned out to be a complete success. With a working vehicle, the next step was to find financial backing that was eventually arranged with Dr. W.H. Finney, and the three incorporated the endeavor late in 1908. The first car nicknamed the Battleship, powered by a 55-60 h.p. Continental four-cylinder engine is reported to have been built in 1910 and can be seen in the lead photo above at the Ward House in Clintonville (it has survived). 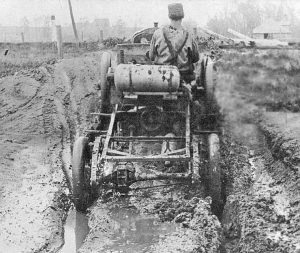 A test car being given a workout through a mud hole and up a bank.

Dr. Finney soon withdrew his financial support, which was replaced by Walter A. Olen, who became the President of the Company. The Badger name was dropped and the cars that followed were renamed the Four Wheel Drive Automobile. The name was next shortened to the F.W.D. and between 1910 and 1911 the company  built at least six of the four-cylinder 45 h.p. 134-inch w.b. machines. 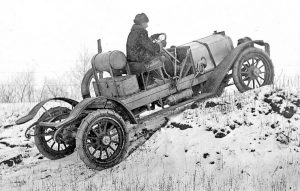 The test car with a more refined gas tank mounting, and with a toolbox and fenders added.

After building the small run of cars, F.W.D. decided that a better market for its product might be in the emerging trucking field. At about the same time, the company found out about a cross-country test that the Army was going to run to test the feasibility of using trucks for some of its needs. It has been reported that F.W.D. was able to arrange for Army Captain A. E. Williams to come to the factory for a test drive of one of the cars.

As a result of Williams visit, the Army purchased one of the F.W.D. chassis’ for the test. With a body mounted on the back, it was named the Scout Car. It proved the benefits of all-wheel drive by outperforming the other three two-wheel drive trucks in the tortuous 1,500-mile test early in 1912.Captain Williams can be seen in the passenger seat of the F.W.D. test truck below. 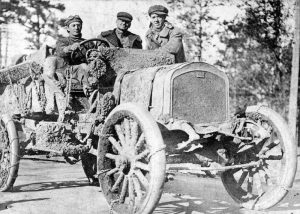 After the Army test, The Automobile reported in its May 9, 1912 issue that Captain Williams was heading to Sparta, Wisconsin for summer maneuvers and further testing of the trucks. There the Scout Car joined two of the recently finished new F.W.D. Truck models for a test in the field under conditions similar to those encountered during a war.

The summer test was favorable, and the Army soon purchased more of the trucks. With the outbreak of World War I just around the corner both the F.W.D. Truck and the Four-Wheel-Drive Jeffery Quad, built in Kenosha, Wisconsin, would prove the worth of the vehicles in the conflict. 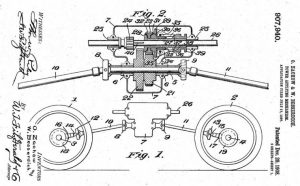 The transfer case patent drawing above and the steerable front drive axle below. 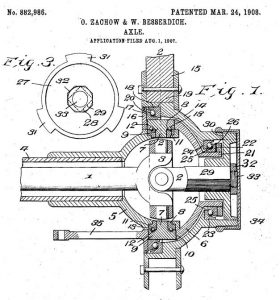