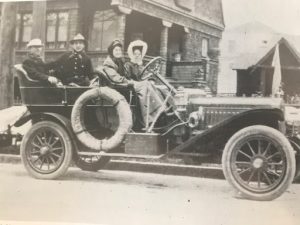 1908 that the first car was driven into Rubicon Springs. The car, driven from the Tahoe side by a woman, Marion Walcott was apparently a promotional event being used to publicize the 1908 Mitchell Touring Car (Built in Wisconsin). The owner of the Rubicon Springs Hotel, AE Hunter, at that time was a Mitchell automobile dealer.

Originally a Native American trail connecting the Sacramento Valley and Lake Tahoe, the Rubicon Trail was re-discovered by European immigrants in the 1840s. By the 1890s, the trail had become an actual road (by the standards of the day) and was used to reach the Rubicon Mineral Springs Resort and Hotel. The first car into Rubicon Springs arrived in 1908, driven by a woman, Marion Walcott, from Lake Tahoe. This historic drive received quite a bit of publicity from the San Francisco newspapers.

Throughout the 1920s, the Rubicon Springs road was being promoted as the best route from Georgetown to Lake Tahoe. To encourage travel along the route, a promotional automobile trip was organized, compete with photographs in the local papers. The write-up included mention of a survey party that would make plans for improving the road.

However, when the Rubicon Springs Hotel closed in the late 1920s, the road fell into disuse. The route has been used by 4-wheel drive vehicles since the early 1950s and has become one of the most famed, 4-wheel drive trails in the world.

Owner Rubicon Soda Springs
Daniel Abbott
After re-purchasing the Springs in 1895, from Sierra Nevada Clark for $3,800, George Hunsucker sold the property at the start of the 1898 tourist season to Daniel Abbott of San Jose for $2000 in gold coins. This included the original 40 acres and all personal property of the Rubicon Springs Resort as of the close of the 1897 season. Abbott, an investor and developer, lived in San Jose, California, about 150 miles west of Rubicon Springs and 40 miles south of San Francisco. Research has not yet determined if Daniel Abbott was an old mining friend who had left the gold rush country and settled in San Jose or an unacquainted investor.
Daniel Abbott was born in 1834 and was 64 years old when he bought the property. He promoted Adie Abbott, the oldest of his seven daughters, as the manager of the Rubicon Soda Springs Hotel when it opened for the 1898 season. She was unmarried and 37 years old, when her father bought the resort. She married in 1914, five years after they had sold the hotel. Perhaps the plans of having his daughter manage the hotel did not work out because in 1899, Abbott’s second season of operation, Rubicon Soda Springs opened with Ms. T.B. Smith as the manager. They listed the season rates for the hotel in the Summer Camp section of the San Francisco Chronicle newspaper as $10.50 to $12.00 per week or $2.00 per day.
Rubicon Springs advertised in the San Francisco Chronicle for the 1904 summer tourist season that it was to be opened under the management of Mrs. Vade Bryson (formerly Mrs. Sierra Nevada Clark). Vade Bryson appears to have managed the Rubicon Springs Hotel through the 1907 summer season. For the 1908 summer season, she advertised in the San Francisco Chronicle Summer Camp section as the manager of a “tent city” at Meeks Bay after “Having severed all connection with Rubicon Springs. . . .”
The Rubicon Springs Hotel did not advertise for the 1908 season. The hotel did not operate or open for regular business during the 1908 season as suggested by the hotel register. Although the hotel did not operate for normal business, there was a notable event in 1908.
The first motorized vehicle to successfully make the trip into Rubicon Springs was a new 1908 Mitchell roadster, owned by A.E. Hunter. Hunter was the son-in-law of Daniel Abbott, owner of Rubicon Springs. He owned the Mitchell automobile dealership in San Francisco and San Jose. The new car left from San Francisco, driven by Marion Walcott, on July 28, 1908.  Marion was a reporter who would write a story about her trip to Rubicon Springs. She had three passengers: Mr. and Mrs. A.E. Hunter and Edward Cohen, also a reporter. The story of their trip appeared in the fall 1908 edition of a new publication called, Pacific Coast Motor. Daniel Abbot apparently made the trip in the traditional method of horse or wagon as he appears in the photograph standing next to the Mitchell automobile parked in front of the hotel.
At the end of  February 1909, Daniel Abbott sold his 40 acres and the Rubicon Springs Hotel, for $10 in gold coins and an Indenture of Mortgage for $2000 to Ralph Colwell of Eldorado County, California. The mortgage to be paid in gold coins, at the rate of 6% percent per annum, payable semiannually, was to be completed by September 2, 1912. Ralph Colwell, owner of Moana Villa Resort on the shore of Lake Tahoe, now owned 280 acres in the Rubicon Valley.
Daniel Abbott died January 2, 1911, at the age of 77 at his home in San Jose, California. Colwell paid off the mortgage on the Rubicon Springs property to A.E. Hunter, Abbott’s son-in-law, on March 18, 1913.