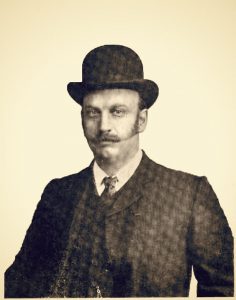 While running the original Wolseley business which had a highly cyclical sales pattern Herbert Austin, searching for products with a steady demand, built, starting in 1895, three cars in his own free time. They were among Britain’s first cars. The third car, of his own design and a four-wheeler, was completed in 1899. By 1901 his fellow directors still could not see future profit in motor vehicles and so with their blessing and the backing of the Vickers brothers he started a separate car manufacturing business still using the name Wolseley.[1]

In 1905 he fell out with Thomas and Albert Vickers on engine design and leaving behind his creation, Wolseley, which he had made Britain’s largest motor vehicle manufacturer Austin obtained the backing of steel magnate Frank Kayser for his own personal enterprise. Kayser provided funds through mortgages and loans, debentures and guarantees to the Midland Bank thereby allowing Austin to keep virtually total ownership of his own business through his personal savings. Further assistance was to come from Dunlop patent holder Harvey du Cros.[1] However Austin’s great rival, William Morris, was to be able to enter the industry proper (he first repaired cars) a little later funding his own operation entirely from his own resources.

In November 1905 Herbert Austin acquired a disused printing works, less than ten years old, seven miles south-west of Birmingham in the small village of Longbridge (then still within Worcestershire) and the following month The Austin Motor Company Limited was incorporated. In the last week of April 1906 a large body of motorists travelled to Longbridge “(where snow lay full three inches deep on the ground and was still falling fast)” to meet the new Austin car, a conventional four-cylinder model with chain drive, available as a 15/20 hp[2] complete at £500 (chassis, £425) and a 25/30 hp for £650 (chassis, £550). “The sole concessionaire for sale of the cars is Mr Harvey Du Cros junior”.[3]

A further injection of capital was needed in 1906 and William Harvey Du Cros (1846-1918) joined the board of directors. After that Harvey Du Cros junior of the Swift Cycle Co and Austin each held approximately half of the ordinary capital. Herbert Austin remained chairman and managing director.[1]