In 1905 Herbert Austin went out on his own and established his own Austin motor company at Longbridge, which would later become part of the City of Birmingham. Prior to the First World War Herbert Austin offered no less than seventeen models in his automobile line-up. 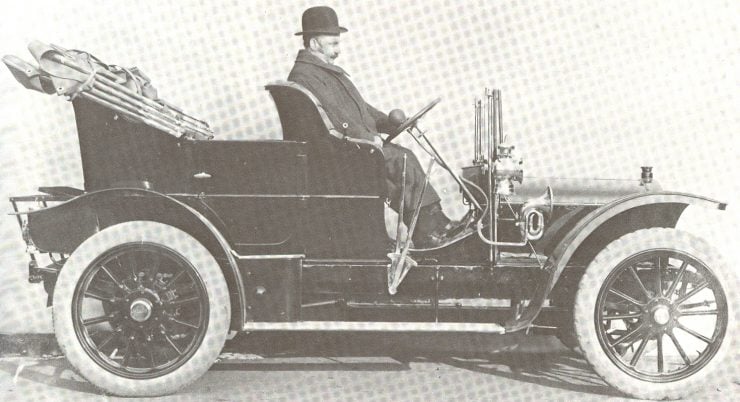 The First World War was to prove very trying for Herbert and his wife Helen. Their only son was killed in action in France in 1915.

The Austin factory was turned over to munitions production for the duration of the war and after the war’s end it proved to be very difficult to get back into the car manufacturing business, to the extent that the company was placed in receivership in 1921.

The threat of company bankruptcy spurred Herbert Austin into looking for the right solution. He could see that there would be a future in motor car manufacture, Ford’s Model T was evidence of that, but that the existing manufacturers were either making quite large automobiles, or they were making small cycle cars.

Herbert Austin determined to build a “real car” that was small enough, and inexpensive enough for people in the middle and professional classes to afford. The idea for the Austin 7 was born. Curiously this history would partly repeat itself in the years after the Second World War and result in the creation of the Austin/Morris Mini.

The Austin 7 is Born

Herbert Austin could not convince the receiver of his Austin Motor Company to invest in his idea to build a small “real car” at a low enough price that many people would be able to afford it. So, what does an enterprising visionary do when the bean counters say no? He goes ahead and does the project in secret, away from their critical eyes.

Herbert Austin set up a drawing office in the billiard room of his home and he quietly recruited a young seventeen year old draftsman named Stanley Edge to work there. He also obtained the services of a number of people with expertise in car design to assist. Herbert Austin was a largely self-taught engineer, in some respects a bit like Henry Ford, but he understood that he’d need sound advice to ensure the project was going to succeed.

Austin had all sorts of ideas as to what this new small car should be like. He thought of using a rear mounted radial engine, he thought of setting the four wheels in a diamond configuration instead of the conventional wheel at each corner concept. He was talked out of the radical design ideas and persuaded to keep the new car’s design conventional and simple. 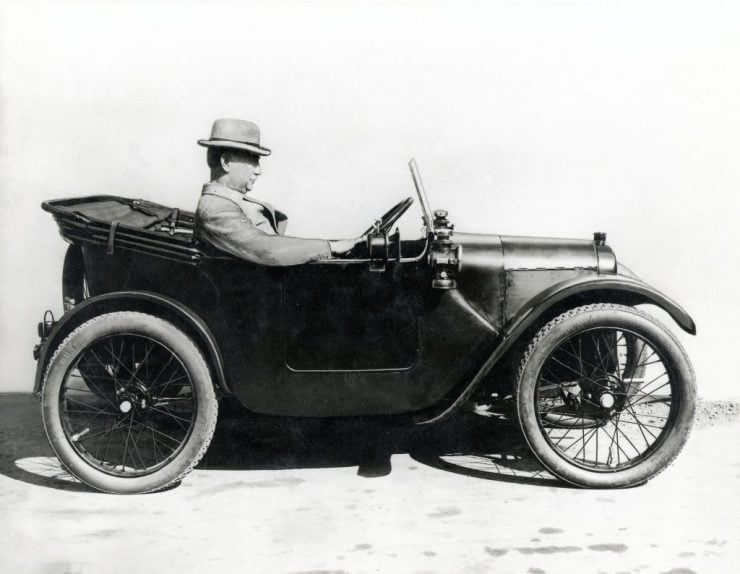 Stanley Edge set to work in consultation with Austin and his advisors on the new design. The engine was based on the existing Austin 20hp side-valve but scaled down to 696cc capacity providing an RAC rating of 7.2hp. The engine block was of cast iron as was the detachable cylinder head, while the crankcase was made of aluminum. 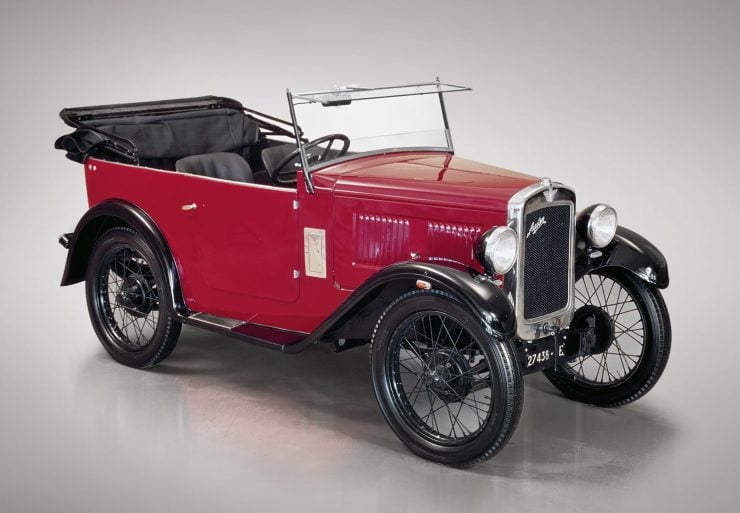 Edge also designed the three speed gearbox and clutch, while Herbert Austin busied himself with the design of the chassis and body. Austin used an “A” frame chassis with outriggers, the engine sitting between the frames at the apex of the “A” and with the front axle suspended by a transverse leaf spring.

A torque tube delivered engine power from the gearbox to the rear axle which was suspended by leaf springs. Steering was by worm and wheel, and the car featured brakes on all four wheels but with a unique catch – the foot-brake operated the rear brakes and a handbrake operated the front, in the motorcycle-style.

This may seem like odd thinking but it needs to be seen in the light of preferred British driving practice of the era. A good driver was expected not to need to use the brakes much at all but instead was to use the gearbox to slow the car. If the brakes of a vehicle are not up to the task of stopping it repeatedly this makes sense, and it was thought that this practice would save brake linings and therefore money.

So, the driver of an Austin 7 would expect to use the foot-brake (rear brakes) with a “heel and toe” gear-change down through the box to slow the car down, interspersed with use of the handbrake (front brakes). This is quite like the method taught for driving traditional heavy semi-trailer trucks in which the driver applies the the trailer brakes and goes down through the gearbox to slow the truck and not over stress the truck’s brake system.

Unlike the Ford Model T, the controls layout of the Austin 7 was in the style we have come to be familiar with. The clutch pedal to the left, brake pedal in the center, and accelerator/throttle pedal to the right. It was the first mass produced car to use this layout. 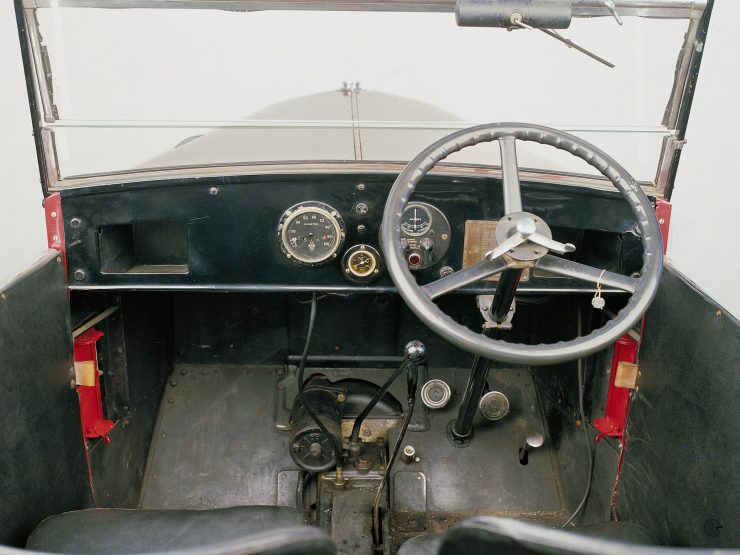 Herbert Austin’s team built three prototype Austin 7’s and showed them to the management at Austin Motor Company, and then to the British public in 1922. Herbert Austin had financed the creation of the new car himself and so had sensibly patented his innovations in his own name. This meant that he was able to charge Austin Motor Company royalties on the use of those patents of two guineas per car. (Note: a guinea was one pound and one shilling). 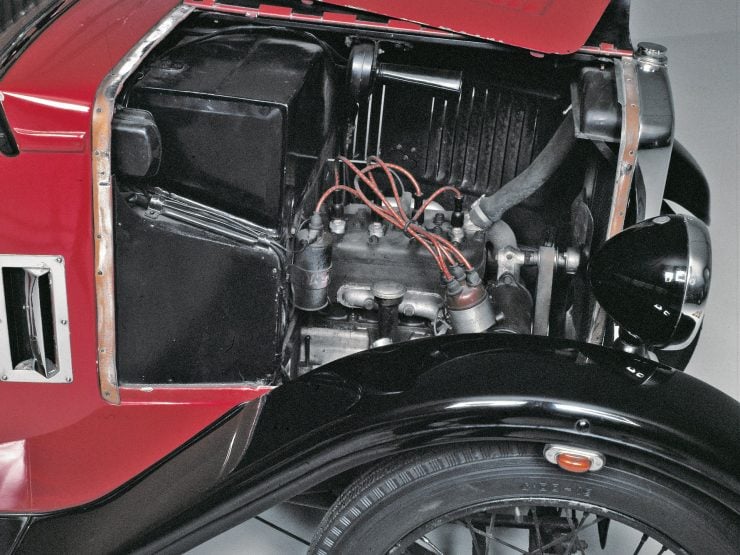 Production of the new Austin 7 began in 1923 with 2,500 being sold in the first year. Herbert Austin had hoped to sell double that number and perhaps was a little disappointed, but sales would grow over the succeeding years in a most satisfying way.

It would remain in production until the beginning of the Second World War in 1939, by which time 290,000 had been made. The “Big Car In Miniature” had eliminated the cycle cars and taken over as Britain’s equivalent of the Model T: like the Model T it brought car ownership to the masses. 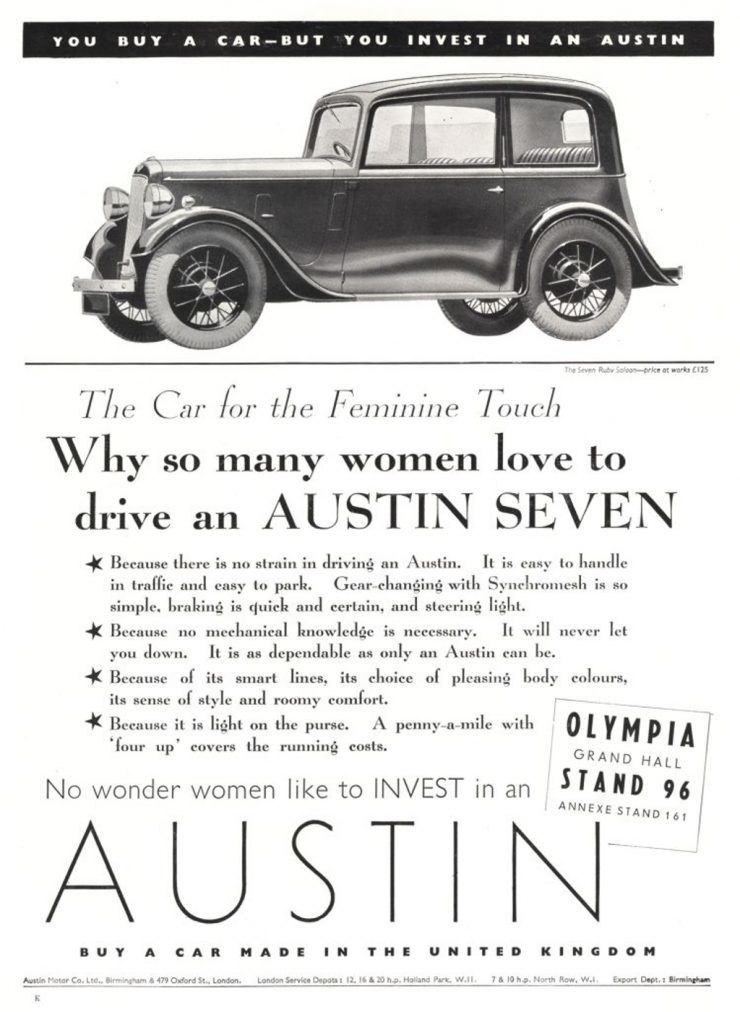 Ignition: Magneto up until 1928 when it was changed to coil.

Gearbox: Three forward speed and one reverse non-synchromesh gearbox. Four speed gearbox introduced in 1932. Synchromesh introduced onto third and fourth gears in 1933, and to second gear in 1934.