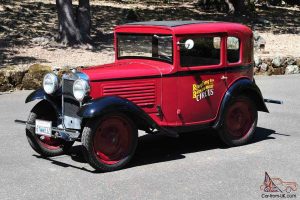 For most of the free world, a car like the American Austin was a good idea, and there was already a market for it. In Europe, automobiles were taxed based on horsepower and, for at least a while, the number of wheels on the road. Anything with less than four wheels was considered a motorcycle and taxed much less. The price of gas itself was enough for Europeans to demand economical vehicles, meaning small, powerless cars fit the bill for general citizens and small businesses.

Could such a car work for the American market, whose population was plenty comfortable with big cars, cheap gas and low taxes? You wouldn’t think Americans would be interested in shoehorning themselves into the pint-sized cars no matter how cute they were. That didn’t stop Englishman Sir Herbert Austin from tossing his hat into the American ring in 1929. He found interest from several different investors, and the American Austin Company was born, making it just a question of where to build them, finally deciding upon Butler, Pennsylvania.

With a beautiful design done by well-known industrial designer Alexis de Sakhnoffsky, an incredible and surprising 52,000 orders were received within a week of being shown for the first time publicly at the National Automobile Show in 1930, many times more than the tiny plant was capable of producing. [Sakhnoffsky is credited with designing what many people feel is the most beautiful car of all time, the 1934 Packard LeBaron dual-cowl phaeton.] Even six months later, with a production rate of just 100 vehicles a day being achieved at the Butler plant, the factory fell way short of demand. It was a problem that quickly fixed itself, as the Great Depression was on its way to looking ugly for the American economy – and for the world. Orders fell drastically and the factory closed in the spring of 1932.

For all practical purposes, that should have been the end of it, but six months later the factory was acquired for $5,000 by several investors, led by 30-year-old Floridian Roy S. Evans, the largest automobile dealer in the South. Two-and-a-half years later, production was still under initial demand, as only 20,000 cars and light-duty trucks drove out of the Butler assembly plant. Evans’ money friends decided to call it quits in 1935, leaving the American Austin Car Company. Evans, ever the optimistic, picked up the pieces and reorganize the company as the American Bantam Car Company in 1936, again hiring Sakhnoffsky to do a conservative redesign to update the vehicles (with so little money in the Bantam coffers, Sakhnoffsky, working for Hayes Body Corporation at the time, charge just $300 for the three days he spent penciling a new look). With production back up in 1938, it seemed economic forces were again making it difficult for the small company to get its feet off the ground as the country went into a rather deep recession. Still, five new models were added to the line in 1939. With approximately $75 per vehicle being lost on each of the 6,700 cars built during the next two years, Bantam’s future was looking bleak.

At about this time, the U.S. Army was in need of a four-wheel-drive ¼-ton military vehicle. Military officials went to Butler to take a look at the current production vehicles and plant capabilities. By the time bid requests were sent out, unfortunately Bantam was already to its knees financially. But while the engineering department had been disbanded, Bantam was determined to come up with a prototype in less than two months. And it was successful, both in coming up with the prototype and successfully exceeding expectations put forth by the U.S. Army requirements for such a vehicle.

Both Ford and Willys had access to the Bantam’s design, and both companies submitted their own version. While the Bantam was successful in design and application, the government felt their plant was not capable of producing the number of vehicles needed for war-time needs. Willys and Ford were given the contracts.

Bantam got its own contract, though, with a vehicle known as the Bantam Reconnaissance Car (BRC). The army requested an all-purpose military vehicle, and it was the BRC that became the prototype of the jeep, later manufactured by Willys and Ford, and it is the direct ancestor of the four-wheel-drive vehicles of today.

In May of 1943, after Willys started claiming in advertising that they had created the Jeep, the Fair Trade Commission charged them with false and misleading advertising stating that the Jeep was fostered and conceived in Butler, PA, by the American Bantam Car Company.

Evans sold his company after the war, and all tools and dies for the government contract work had to be destroyed. Although the Austins and later Bantams were intended to be serious commercial products aimed at economy (preceding the Volkswagen by many years) they unfortunately were never taken very seriously by Americans.

The original American Austin engine was licensed from Austin in 1929, and some of the parts, like pistons, bearings etc., can be used in English or American engines. The American version was a 45.6 cubic inch (750cc) four-cylinder flathead with 5.0:1 compression. The main bearings are a cylindrical roller in the back and a double row of (double annular) ball bearings in front. The whole engine with clutch and all accessories weighs only 148 lbs. The cars with this engine attained 40 mpg, but with 13 horsepower top speed was likely to be around 50 mph, at which one could expect some crankshaft whip and an anguished keening from under the hood.