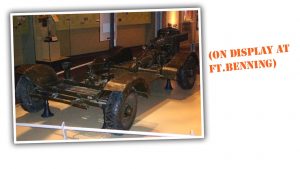 The development of the jeep continued steadily as World War II approached. In 1937 Marmon-Herrington fitted a doorless four-seater body to its half-ton, four-wheel-drive chassis; and the Command Car was born. The original prototype was based upon a Model 77 Ford. However, when the car went into production, in 1939, a Dodge chassis was used.

The Dodge Command Car and its equally sturdy companion, the Weapons Carrier, were produced in substantial numbers throughout World War II and supplied the basis for the Dodge Power Wagon of the postwar years. Still, the army believed a more nimble machine was needed.

Meanwhile, at Fort Benning, Georgia, Major Robert Howie and Master Sergeant Melvin C. Wiley were developing a new type of vehicle, a combination reconnaissance car and machine gun carrier. Working on their own time, and reportedly at Major Howie’s expense, the two men pieced together a highly unusual vehicle, made largely from scrap.

Designed to carry two passengers lying prone, the machine quickly became known as the Howie Belly-Flopper. Major chassis components, including the engine, came from an old American Austin. The wheelbase, like that of the Austin, was 75 inches. Front-wheel drive was employed, with the powerplant mounted at the rear. A machine gun was located forward of the riders. The Belly-Flopper’s silhouette was very low, which presented obvious advantages for combat purposes; but ground clearance was insufficient for use in rough terrain. Anyway, it lacked the advantage of four-wheel drive.

The Howie rig must have provided a punishing ride, for it had no springs. Only a set of fat tires cushioned the jolts experienced by its two prone passengers. The driver operated the clutch and brake with his feet while stretched out flat on his stomach. Steering was by means of a lever. However, the Howie was highly maneuverable, and although its top speed was no more than 28 miles an hour, its lightweight construction provided a reasonably good horsepower-to-weight ratio.

Major Howie was convinced that his machine, despite its obvious shortcomings, could be developed into a practical vehicle for military use. The Army took the proposal seriously enough that in March 1940 representatives of the automobile industry were invited to examine it.

Largely the reaction was one of laughter. Barney Roos, executive vice president and chief engineer at Willys-Overland, later commented, “That Belly Flopper looked like nothing any automobile man had ever seen before, a cross between a kid’s scooter and a diving board on wheels.” Yet this odd contraption evidently set several people — including Roos himself — to thinking about the possibility of a practical light reconnaissance car.

Meanwhile, Frank Fenn, president of American Bantam, caught wind of the Army’s need for this light car. Bantam was a company that had been on the verge of bankruptcy ever since its incorporation in 1929 as the American Austin Car Company, and Fenn was determined to save it. With the knowledge that America was moving toward war, Fenn began to develop his company’s small car to meet the Army’s need for a light reconnaissance vehicle.

The car used by Fenn stemmed from a late 1920s effort to meet the demand for a “second car in every garage.” Bantam had converted Britain’s diminutive Austin to better meet American needs and began to sell the car on June 21, 1930. However, due to several factors the car failed miserably, and by June 1934, American Austin was bankrupt.

Reorganized as the American Bantam Car Company, by 1938 the Butler factory was producing a much improved automobile, called simply the Bantam. This, with assorted mechanical modifications, made possible the elimination of the $7-per-unit royalty paid to Austin of England.

In 1939 Bantam was building a very competent little automobile. By lengthening the stroke and increasing the compression ratio, engineers had boosted the horsepower to 22 — a 69 percent increase. A third main bearing eliminated the problem of crankshaft “whip.” A belt-driven generator combined with conventional Babbitt bearings to reduce the noise level. And of course performance was greatly enhanced. Flat out, the Bantam would do a mile a minute, and it would cruise all day at 50 mph without complaint.

Still, sales failed to materialize in significant numbers. By June 30, 1940, the factory doors had closed, though a few leftover cars were sold as 1941 models.

Bantam’s only hope for survival was to get in on the war effort. In 1938 three Bantams, supplied by the manufacturer to the Pennsylvania National Guard, created a very favorable impression. In August of that year, the Quartermaster Corps recommended the establishment of a formal project to develop a suitable body for the Bantam chassis. This would facilitate testing against the three-passenger motor tricycle.

On the next page, get the specifications for the Army vehicle that Bantam built which would later become the prototype model for the jeep.