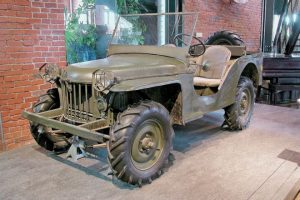 The Bantam BRC-60 (or Mark II) was the first revision of the Bantam pilot model. These hand-built models were part of the first 1/4-ton contract for 70 vehicles (1 pilot model + 69 additional after acceptance of the pilot model, to be distributed as follows: 40 for the Infantry, 20 for the Cavalry and 10 for the Field Artillery.). The successful tests of the Bantam pilot model revealed some weaknesses, and improvements including the more military looking, squared-off front fenders were incorporated into the additional 69 BRC-60 (Bantam Reconnaisance Car) vehicles. Only one is known to still exist, on loan from the Smithsonian Institution to the Pittsburgh Regional History Center. (Pennsylvania Historical and Museum Commission)