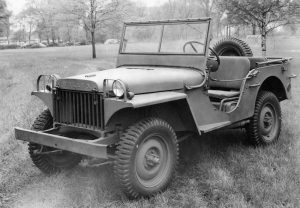 Production began on June 5th, 1941 and around 1,555 Willys MAs were built and delivered to the Army Quartermaster Corps. Out of this number, 50 were built with four-wheel steering. Few remain, as most of those produced were subsequently sent to Russia or England under the Lend-Lease program.